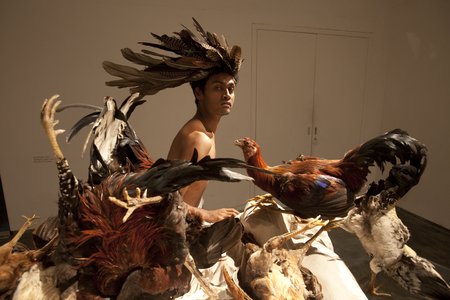 Shine Shivan was born in 1981 in Kerala, India. He has a Masters in Visual Arts from Dr. Bhim Rao Ambedkar University, Agra, India, and a Bachelor in Fine Arts from the College of Arts, Delhi. He has previously shown at Khoj Studios, Delhi, India and was the recipient of a Lalit Kala Academy Scholarship in 2008. Shine debuted with a solo show, Sperm Weaver, at Gallery Maskara, Mumbai, India in 2009. His video work was shown at Move on Asia 2010, Tate Modern, London, UK following the success of Move on Asia 2010, at Gallery Loop, Seoul, Korea. In November 2010 his work was part of an exhibition at MOCA Taipei, in Taipei, Taiwan. Shine Shivan was one of the artists shortlisted for the SKODA Prize Twenty 2010. In 2011, Shivan’s had a second solo Suck Spit at Gallery Maskara, Mumbai, India. He showed at the India Art Summit 2011, Crossroads: India Escalate at Prague Biennale 5 and (M)other India, Galerie du Jour – Agnès B, Paris, France. In 2012, Shivan participated in group exhibitions at the India Art Fair, New Delhi and the VIP Art Fair (online) as well as How Am I? at the Kastrupgårdsamlingen museum in Copenhagen and The Secret Life of Plants curated by Maya Kovskaya at Exhibit 320 in Delhi. Glimpse of Thirst, Shivan’s third solo show at Gallery Maskara opened in January 2013 at Gallery Maskara followed by a solo presentation at Art Brussels in April of the same year. In October 2013 Shivan participated in Young International Artist Art Fair (YIA Art Fair), Paris, France. In 2014 Shivan was a part of group exhibition at the India Art Fair, New Delhi in January, In March 2014 Shivan participated in an exhibition Drawing Now, Paris, France. In October he was a part of Young International Artist Art Fair (YIA Art Fair), Paris, France and Kaleidoscopic India Maison Guerlain, Paris, France in October-November. Shine Shivan in November also had his fourth solo show Language of Deceased at Gallery Maskara, Mumbai, India. In 2016 Shine had a solo show My Mentor is a Wolf at Galerie Felix Frachon, Brussels, Belgium. The artist lives and works in Faridabad, India.