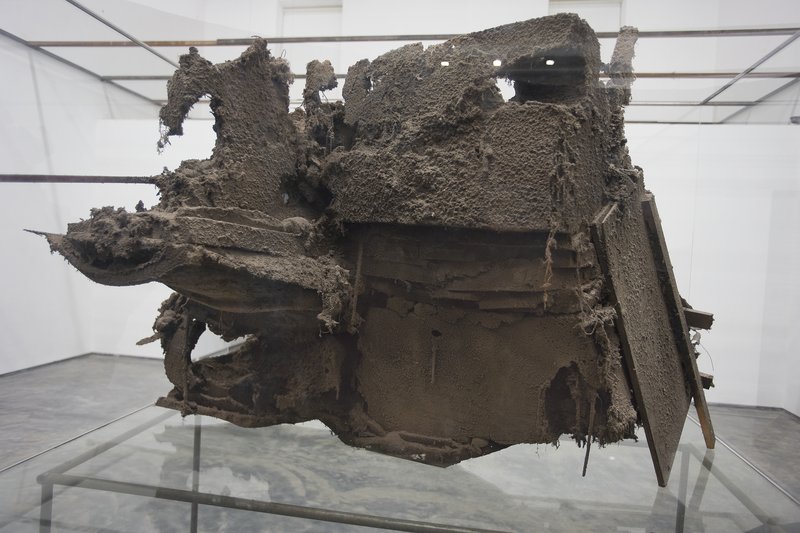 The Belgian artist Peter Buggenhout (born 1963) started his career as a painter and drawer. In 1989 his paintings exploded into 3D. Since then Buggenhout has been creating sculptures with twisted intestines of cows and horses, sculptures with dust titled "The Blind Leading the Blind" and sculptures with “abject” material like blood and hair, called “Gorgo”.

Buggenhout’s art is a solidification and standstill of undulating, pulsing and swarming movements. It is never clear whether his sculptures and installations, stuck together and expanded, have really got started or already reached their end some time ago. Peter Buggenhout’s art presents a-nostalgic memory, an imagination of a futuristic and visionary presence, always in extension. Peter Buggenhout introduces a contemporary approach of the “spirit” on an affective-pre-cognitive and analogue way. Even though Peter Buggenhout’s art has been created with abject material, the artwork itself cannot be called abject anymore. The artwork does not reject (something), but it does not create nostalgia or utopia either.

The intestine-sculptures have a specific texture which reminds subtly to the canvas of painting. These cocoon-like sculptures look as if painting has crawled in itself. Since 2003 Peter Buggenhout creates dust-sculptures. They look like ant’s nests, textiles in 3D or fragile meteorites that have crashed into the exhibition space. Often the notion of dust is interpreted as a residue or by-product, which is at the same time a vital layer of our simultaneously condensed and elastic ‘imagined’ reality. Dust connects the danger and violence of repression and the subtlety of transformation in the art of Peter Buggenhout.

In the legal tradition ‘res derelictae’ is used for abandoned assets or as Peter Buggenhout calls them: objects owned by nobody. Examples of res derelictae are: waste material, but also inventions and artistic creations, frequencies of the broadcast spectrum, subsurface minerals and orbital spaces.